Hannah Ryggen (1894-1970) remains one of the most distinct and influential artists of the 20th century.

The motives in Ryggen’s works bear evidence of her strong political involvement, being visualisations of her reactions to political events from the 1930s and up until her death in 1970. Technically speaking, her works represent a renewal of textile art. Ryggen’s art is still relevant today, which is confirmed by the frequent loan applications from museums, nationally and internationally.

Hanna Jönsson was born and raised in Malmö, Sweden. She trained as a teacher, but her heart was more into painting, an interest that took her on a study trip to Dresden, Germany in 1922. There she met Hans Ryggen, and eventually moved to his farm at Ørland on the Fosen peninsula in the Trondheim Fjord. She developed her knowledge about dying yarn and weaving – and her monumental tapestries would go on to give her significant recognition. She became the first textile artist to participate in the Autumn Exhibition (1964), and the first female artist to represent Norway at the Venice Biennale (1964). Ryggen created more than 100 large-scale works, which are now displayed in museums and public buildings all around Scandinavia. Most of them are part of the National Museum of Decorative Arts and Design’s collection.

Works on view in the permanent exhibition

The tapestry is an eerie narrative over the death of hope, as well as the Nazi imprisonment and torture of innocents. Here we see a representation of the pacifist and Nobel Peace Prize winner Carl von Ossietzky, who was sentenced to death for treason. He holds a caduceus, in which the top is shaped like a heart. The heart symbolizes hope and tolerance, but may also symbolize mourning.

The tapestry is a critique of Hitler’s regime. The student Liselotte Hermann was, in 1937, sentenced to death for high treason for handing over sensitive information to the Communist Party about the military developments in Germany. In the tapestry she is represented as the Virgin Mary in the rose bower, which is a symbol of innocence and purity.

The tapestry is a triptych about the Nazi occupation of Norway, and the execution of 31 propitiatory sacrifices on October 6th, 1942. The scene includes Henry Gleditsch, the director of the Trøndelag Theatre, being executed by Hitler, who is satirically represented with oak leaves coming out of his rump. Gleditsch and his wife constitutes a pieta. In the middle we see Churchill, and to the right, the Ryggen family’s dream of escape.

This tapestry was originally the central panel of a triptych entitled Salt of the Earth, an intended decoration for Bakkehaugen church in Oslo. Kaj Munk was a Danish priest and playwright, and a unifying figure in the resistance against Germany's occupation of Denmark. Plays like He’s sitting by the crucible, Niels Ebbesen and Before Cannae were direct attacks on Nazism.

Jul Kvale was one of the first people in Norway who openly protested against NATO, he can be seen holding the artist’s hand. In the top left, we see the first United Nations Secretary General, together with the Norwegian Foreign Minister, who negotiated Norwegian membership in NATO. Beneath them, we see women and children with a muzzle, which symbolizes disempowerment and intolerance.

Ethiopia is one of Ryggen’s earliest anti-war tapestries. It was a reaction to Italy's and Mussolini's invasion of Ethiopia. Mussolini is represented with his decapitated head impaled on a spear. In the middle, we see Ethiopia's Emperor, Haile Selassie and Italy's ambassador. Ethiopia was seen as too offensive when it was exhibited at the World Fair in Paris in 1937, and they hid the section with Mussolini's head by folding it behind.

The tapestry is a reference to the collection of poems by T. S Eliot entitled Four Quartets (1943). Ryggen is discussing the part love plays in our lives, both as an important element in crafts, and as a creative and devouring force. This is represented through a colour jar and a spinning wheel, both essential tools, but also symbols of the cycle of life. 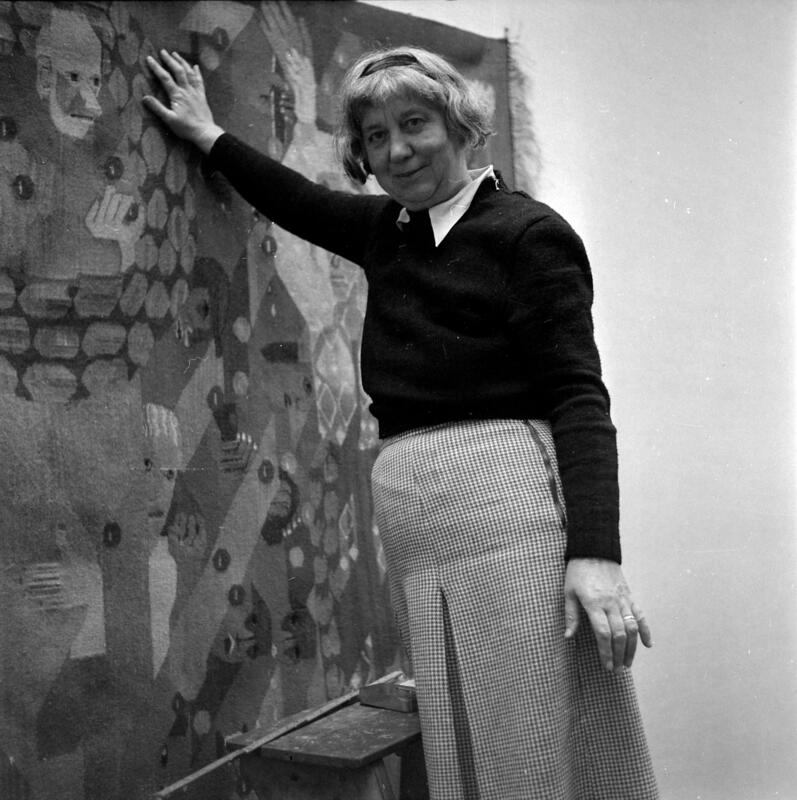 The celebration of an artist